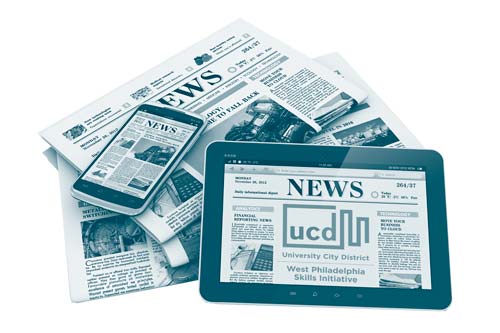 She fell in love with the trees. Born and raised in West Philadelphia, she would pass through Penn as a curious and attentive child. Traveling on SEPTA with her mother, she was fascinated by the University’s arboreal campus, unique and scenic architecture, and pacific quality of life.

She grew up around 52nd and Market streets, on the border of University City, in a hard-working, working-class African-American neighborhood that was ravaged by drugs. She felt unsafe and uncomfortable. Penn looked secure and serene.

Playing, living, and working in University City was her dream.

She is Sonja Claxton, a clinical receptionist in her early 30s at the School of Dental Medicine.

She graduated from Temple University in January of 2008, and gave birth to a daughter soon after. The Great Recession made finding work almost impossible. She was out of the workforce for a year and a half before she was hired at a pharmaceutical company in King of Prussia.

She worked there for three years. During her first year, she commuted from West Philly on six different modes of public transportation. She had trouble getting back to the city before her daughter’s child care center closed. She looked for something closer.

She was hired at The Common Market in North Philly. She worked at the nonprofit food distributor for a year, then volunteered at the Free Library of Philadelphia, followed by temp work at the Jewish Federation of Greater Philadelphia.

In April of 2016, she found herself unemployed.

She had heard about the University City District’s West Philadelphia Skills Initiative and signed up for its listserv. She kept an eagle eye on new recruitments, and saw a posting for individuals with customer service and health care experience.

She wasn’t sure if she was qualified, but she applied. The application process was rigorous and strenuous. Nevertheless, she persisted.

She was selected for an interview and accepted into the program. She began her monthlong training in January 2017.

Initially timid and insecure, her confidence grew. She took detailed notes, participated in lectures, stayed after class, and did research on her own, including completing Penn Dental’s “Introduction to Dental Medicine” Coursera course.

“I felt like I was in school again,” Claxton says, “but I felt like the stakes were a lot higher.”

In February of 2017, she began working at Penn Dental.